Which is the best scooter for your toddler from 12 + months? Here we explain how to make the best choice between the different kinds of Micro scooters with a seat.

Mini Micro: the scooter that grows with your child!

The 3-wheeled Mini Micro scooter is designed to develop balance, coordination and motor skills. The 'lean-and-steer' mechanism means your child steers with its weight, which is very intuitive even for very small children.

With the addition of a seat these scooters can be used from as young as 1 year old. The seat can be removed when your child is around 2 years old and ready to scoot independently.

Micro scooters are well designed and well made - they will be used daily for years and can then be handed down from child to child. They are often regarded as the best buy ever for a child!

The Mini Micro scooter with seat comes in different versions that you can choose from. Read on to decide which one is best for you.

For the earliest little scooters

We recommend the Mini Micro 3in1 Deluxe from 12 months.

The Mini Micro 3in1 Deluxe is a Mini Micro Deluxe scooter with the addition of a seat which attaches to the separate O-bar steer. The O-bar has a round handle which is specially designed for tiny hands to grip easily. The seat is attached directly to the O-bar and can be adjusted to two heights. In the lowest position at 20cm even children from 12 months can sit with their feet on the floor for ultimate stability. From 18 months you can raise the seat to 29cm.

You can also add the pushbar (sold separately) which is easily attached to the back of the seat so you can push your child.

From 2 years you can remove the O-bar and replace it with the included regular T-bar so your child can scoot independently. The T-bar is height adjustable and suitable from 2-6 years.

The Mini Micro Deluxe 3in1 scooter is available in pink and aqua. It can be used from 1-6 years and includes the Mini Micro scooter with T-bar plus the seat with O-bar. 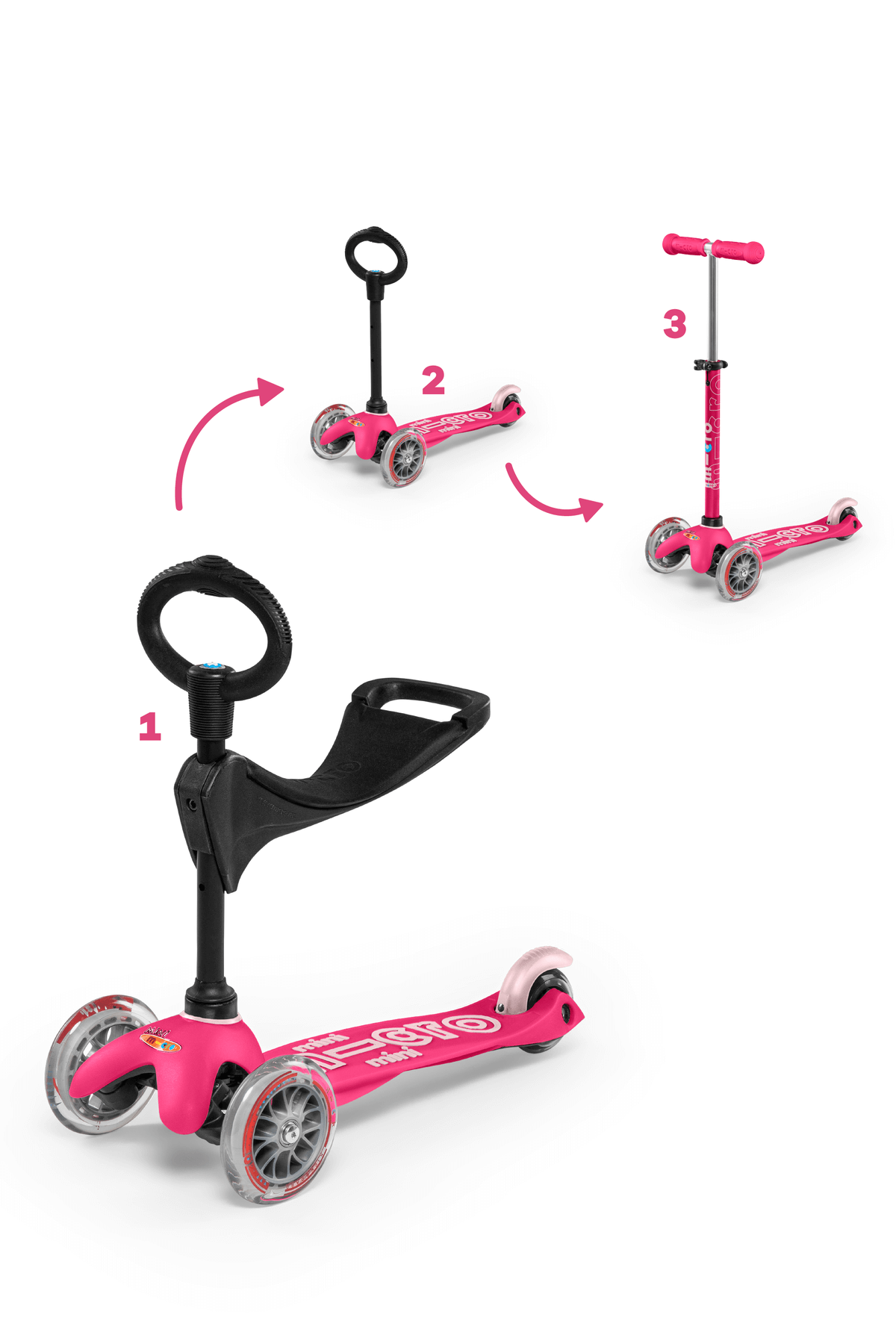 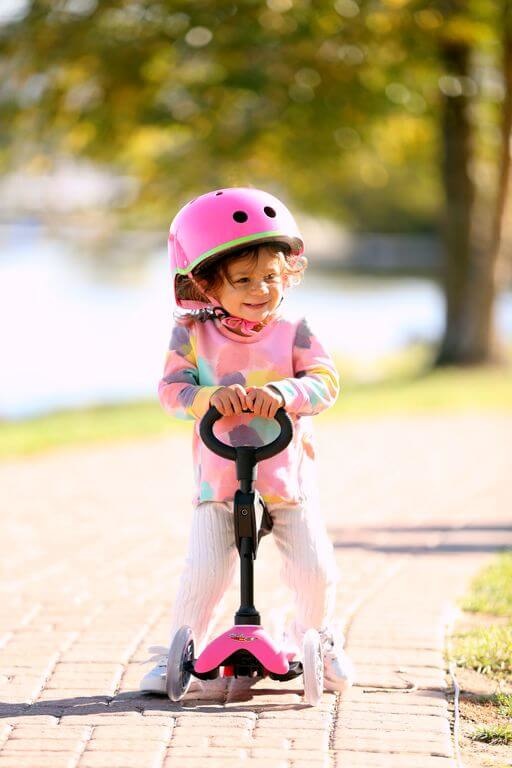 1.5 years old and not yet ready to scoot unaided?

Then the best choice is the Mini Micro 3in1 Deluxe Push!

This is the trusted Mini Micro Deluxe scooter with a seat that attaches directly to the T-bar at a height of 29cm, combined with a footrest and push bar which connects to the back of the seat. Your child can easily push themselves around whilst seated. For longer distances, attach the telescopic bar (no tools needed!) to push the scooter.

As soon as your child is ready to scoot (around 2 years old), remove the seat and they can scoot off with confidence on the Mini Micro scooter. The adjustable T-bar also grows with your child and is suitable up to 6 years old. 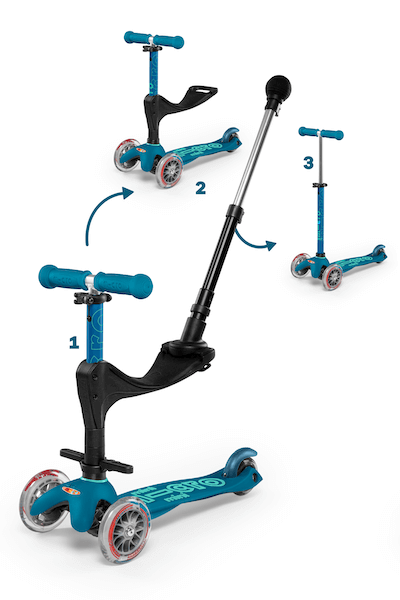 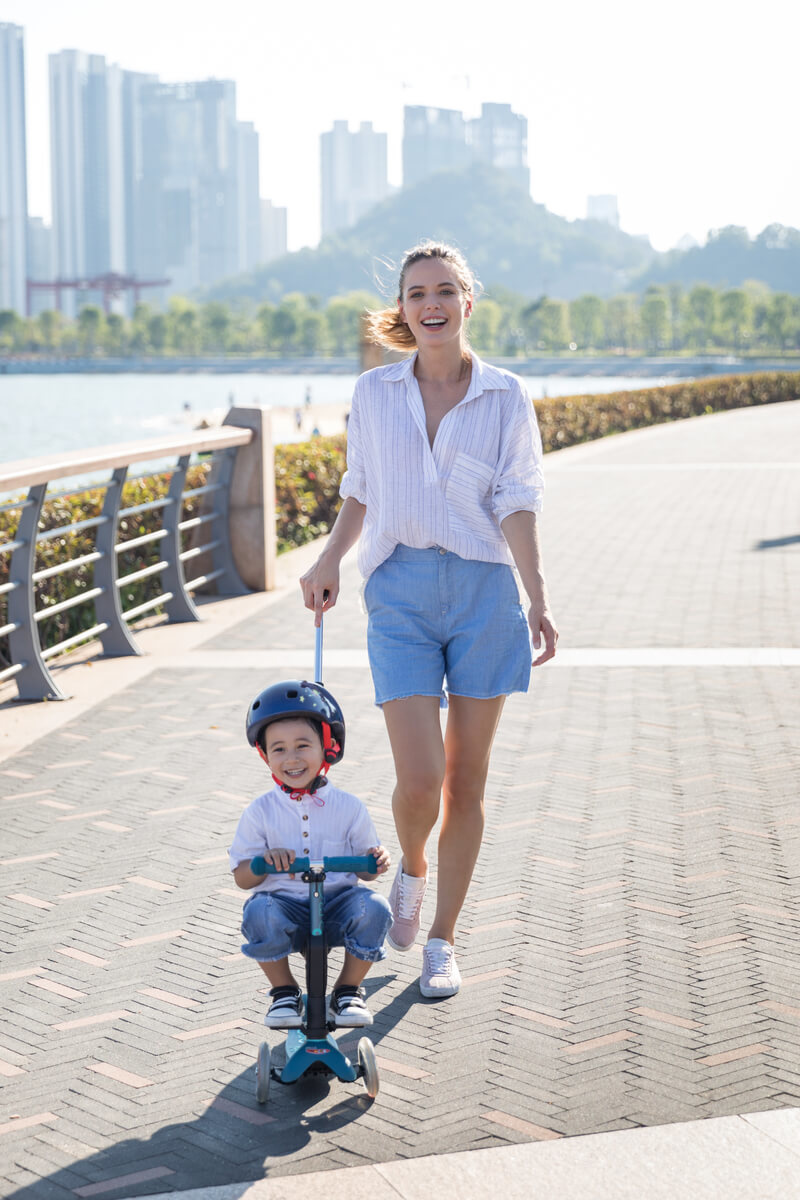 Would you like a solid seat and some space to bring little treasures along?

The Micro Mini2go Push has it all!

The Micro Mini2go Push is also based on the original Micro Deluxe step. The seat is fixed at the same height as the Mini 3in1 Deluxe Push (29cm) and is therefore most suitable for use from 1.5 years.

It comes with a box sliding neatly under the seat, a handy space to bring along some toys, extra layers or snacks. Your child can easily ride around independently on the Mini2go. The seat and box are not sold separately, only as part of the Mini2go set.

If you want to walk longer distances, you can push your child along with the pushbar which attaches simply without tools to the back of the seat.

The Mini2go also features a LED light under the seat for a cool look lighting up the box, or it can be attached to the steering column of the scooter.

When your child is old enough to scoot independently, simply remove the seat and box and watch them scoot off on the Mini Micro Deluxe scooter! The Micro Mini2go is suitable from 1.5 to 6 years. 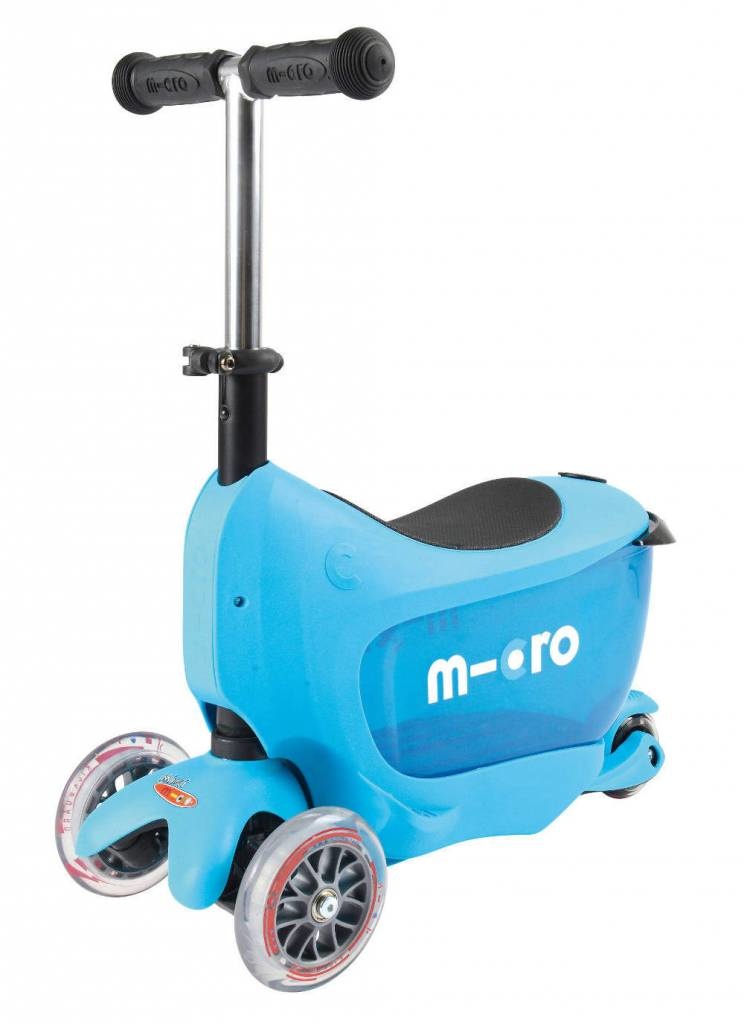 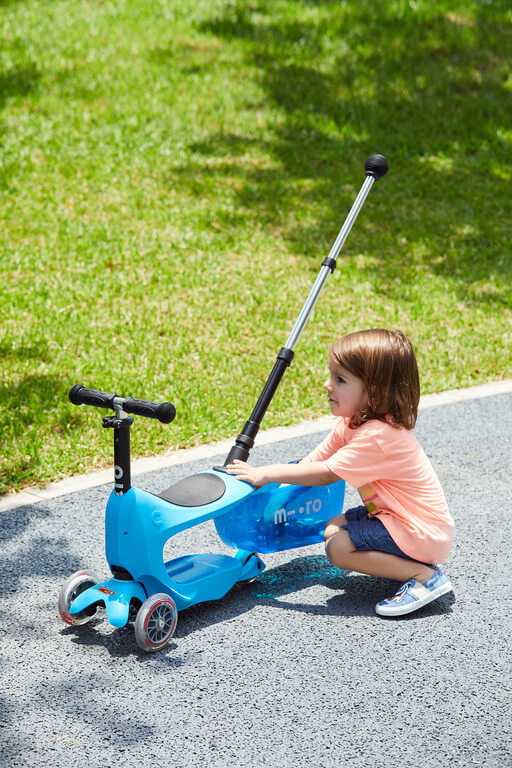